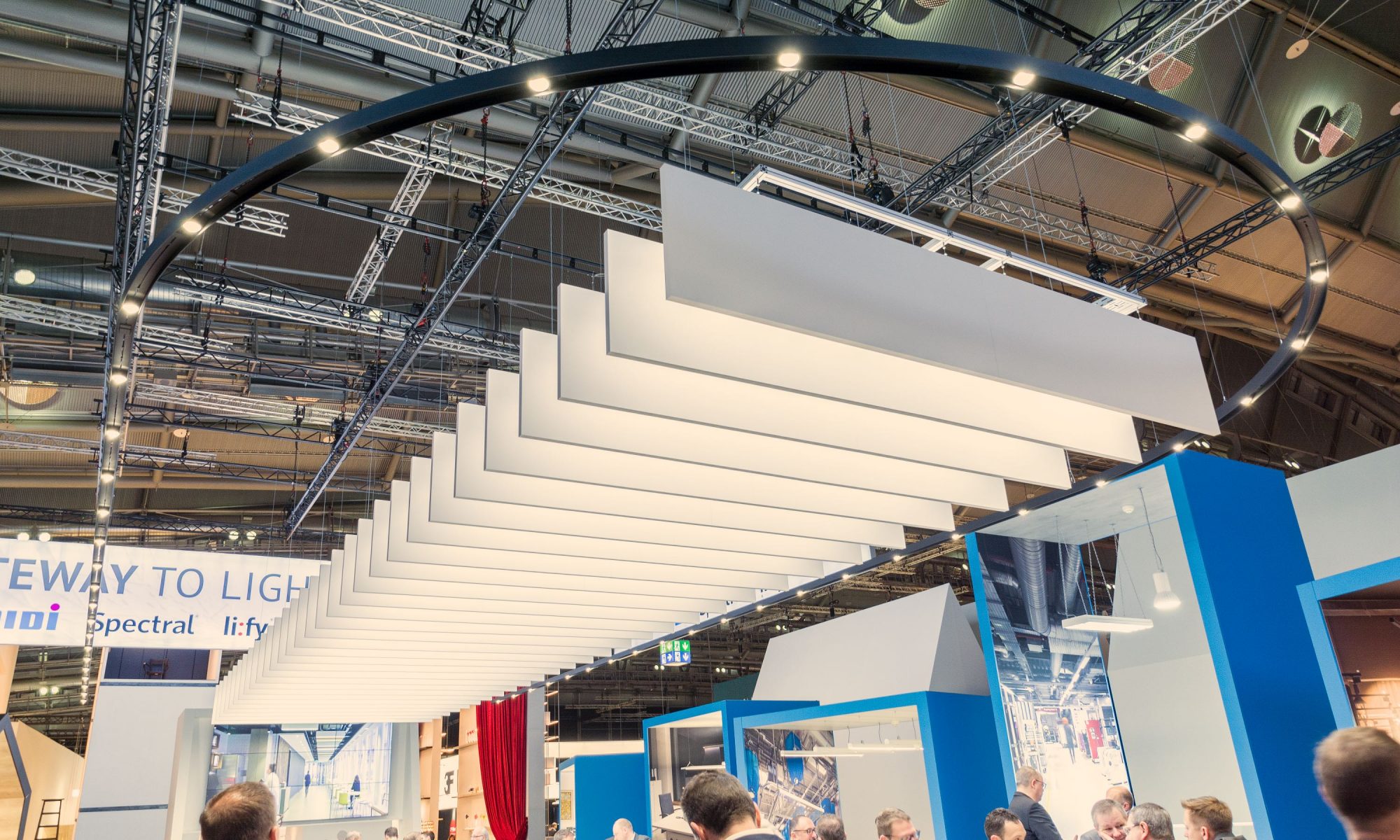 Light + Building in Frankfurt is the largest exhibition of its kind where the industry presents every two years the latest products for the fields of lighting, electrical engineering as well as home and building automation. More than 220’00 visitors attended this years fair.

Spectral showed only new products as part of the RIDI Group ‘Gateway to Light’ stand. The concept was to individualise the product groups with a single ‘gateway’ which allowed a more intimate presentation to our visitor’s. Feedback was unanimously positive and it was great to see familiar and new faces during the week.

This membrane ceiling system offers standard sizes to cover large areas of uniform light with exceptionally smooth dimming and tunable white options. You can specify 650x650mm, 1250x1250mm or1800x1800mm sizes with a total depth of 100mm. What is unique is the Norea-L system is delivered in a wooden box, pre wired as a complete luminaire requiring the installer to simply connect it to the power.

Whilst the structure remains the same, the H Profil system has comprehensively been revamped to include a myriad of light insert options allowing the designer to tailor the look, the output and the mood required. New ultra low glare options are available as well as more artisan decorative inserts

Light + Building takes place every two years and is a showcase of the latest products for the fields of lighting, electrical engineering as well as home and building automation. It seems to get bigger and bigger with more than 220’00 visitors attended this years fair.

For me, Digitalisation was the banner trend. As a trained product designer it was a pleasure to see luminaire design upping its game with the integration of innovative lighting technology.. The other more controversial trend was to see the spotlight shift to people and their personal needs,; Human Centric Lighting (or HCL) has its doubters but companies are starting to put humans at the centre of the design brief which surely can only be a good thing. The effects of light on people, their health, their performance capability and well-being is driving lighting technology and luminaire design.

Spectral showed only new products as part of the RIDI Group ‘Gateway to Light’ stand. The concept was to individualise the product groups with a single ‘gateway’ which allowed a more intimate presentation to our visitor’s. Feedback was unanimously positive and it was great to see familiar and new faces during the week. We also showcased adaptive light in terms of intensity and white colour to allow visitors to experience what it feels like

LED has allowed designers to miniaturise lumianires over the past years. However, they still require a power source and this often thwarts the delicacy of some luminaires. Not so LBK which features integral power and control from an incredibly small body (24 x 50mm). The LBK system is a construction system that allows the specifier to create shapes and patterns with light to suit either surface of suspended applications. A cleverly developed optic gives a braod distribution but crucially puts light back onto the surrounding surface to reduce contrast and create a comforting ‘glow’ around the luminaire.

The new S36 linear system uses much of the same design principles we use in the LBK system (compactness, integration and creative options) but offers the specifier finish options such as anodised brushed matt black. A key feature is you can specify continuous indirect light aswell as direct light. You can also add sensors, emergency and many optical options to suit the task – asymmetric, low glare, decorative, narrow or wide beams. The Pergament diffuser option was shown at the fair and its clarity and sharp lines was commended by all those who saw it.

This floors standing luminaire integrates the latest sensor technology with the ability to chare devices via the USB port. The design centres on the individual and how they work – the touch sensitive control panel in the column allows the user to finitely adjust the light level and it will dim to 10% when you leave the area and return the your set level when you return. The ORTO optic system has been co developed with a leading optical manufacturer to ensure maximum comfort when working at a workstation.

Fresh off the back of being awarded the prestigious IF award, Dome was shown in Floor standing and pendant format and demonstrated to visitors the affect of tuning the colour of white light to suit your needs and mood. The fitting is capable of knowing if you are there and will react if you are not, reducing the light level to a pre programmed level.