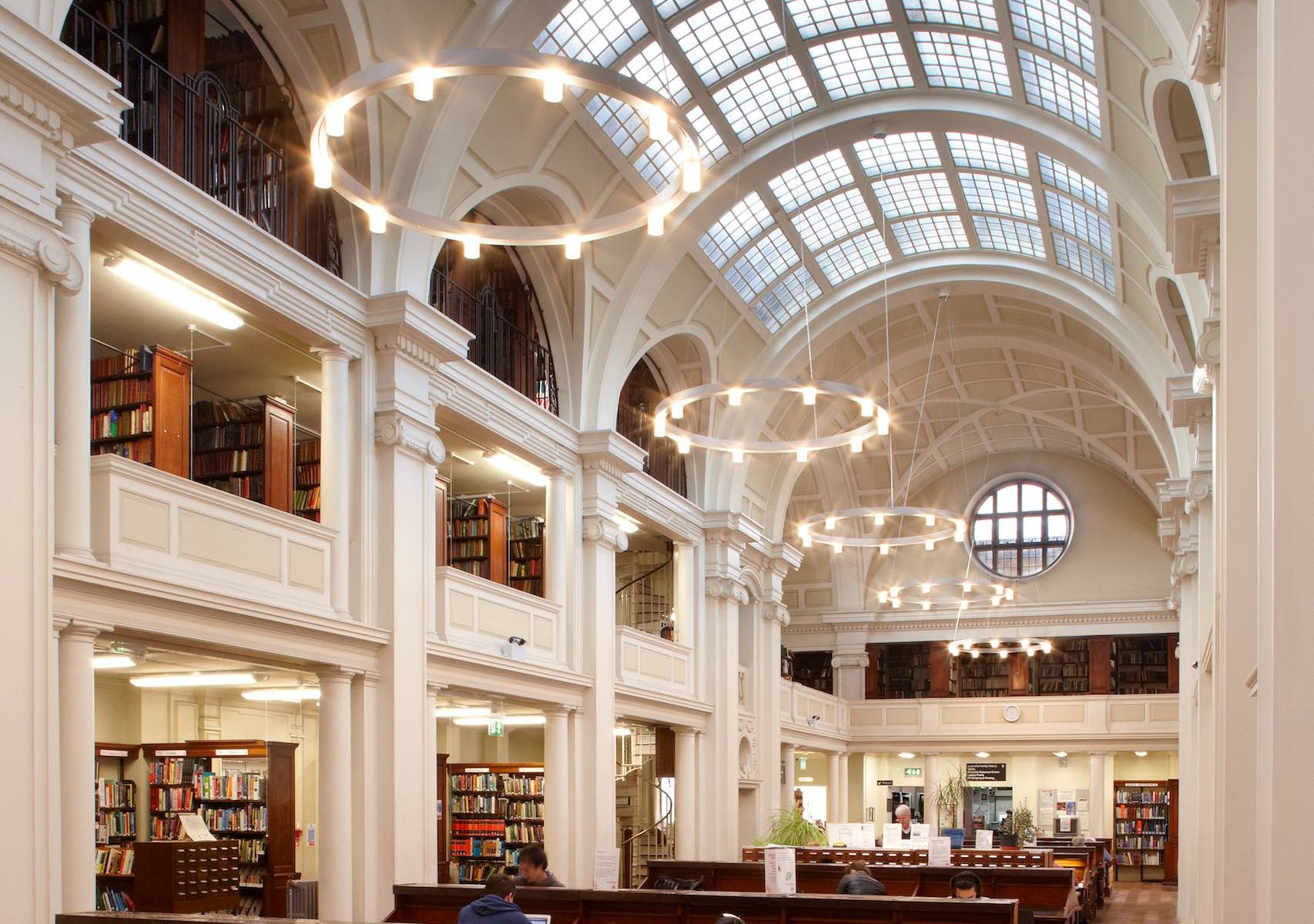 Share List
Building services are changing and the way they are managed continues to evolve, even when the physical structure does not.

There has been an increased focus on lighting in recent years with the rise of LED, which has been furthered by the imminent Part L revisions that are lighting specific. It’s all great news as lighting can account for some of the largest energy spend in a building and reducing this is always going to be greener and more financially prudent. One challenge, however, is making new technologies fit our heritage buildings, “preserving the old ways from being abused,” if you will.

Overcoming this challenge was very much the focus of Spectral Lighting’s latest project at Bristol’s Central Library. The Grade 1 listed building was built in 1906 following a competition welcoming designs to replace Bristol’s old public library. A Charles Holden design won and has become, along with his Edward VII wing at the Bristol Royal Infirmary, some of the most highly regarded examples of Edwardian architecture in the city.

“We needed a replacement for the existing GLS chandeliers,”

The main reading room in the library has a vast tunnel vaulted glass ceiling that was lit with classical, candelabra style chandeliers. When the building was recently rewired, the building managers looked at how they could make this area’s lighting scheme more efficient. As beautiful as the chandeliers were, they were more decorative than functional pieces and were extremely inefficient.

“We needed a replacement for the existing GLS chandeliers,” says Andrew Boulton, Senior Engineer at Bristol City Council. “Our fittings’ inefficiency became hard to justify so we needed to find a low energy, low maintenance alternative with functional light levels and high colour rendering, but equally important was the aesthetic, we would not compromise the heritage of the library.”

Working with electrical contractor, Hordes Electrical, Spectral Lighting offered CAD renderings of a proposed design that used its extruded, H-PROFIL system. The unique aluminium profile can be suspended to any length using steel wires, finished in any colour and shaped to fit individual project requirements.

“We are seeing a lot of heritage building managers looking closely at their lighting systems as they are just not up to scratch in today’s lighting-landscape,” says Spectral UK Head of Design, Jon Estell. “The biggest challenge in these settings is offering a design that will fit the architecture and history; providing energy efficient solutions is relatively easy but modern luminaire design doesn’t always lend itself to listed buildings. That’s where H-PROFIL shines.”

“The flexibility of the system is key to its success here at the library,”

Spectral was founded on the principal of producing special and bespoke luminaires and the H-PROFIL system allows for designs to be created on an individual project basis. It removes the situation where uniform fittings are shoehorned into unsuitable settings and in the case of Bristol, Spectral worked with Hordes to create a design that fits seamlessly into Holden’s Edwardian vision.

“The flexibility of the system is key to its success here at the library,” says Richard Williams, Director at Hordes Electrical. “The luminaire designs are a collaborative effort between Bristol City Council, our team at Hordes and Spectral, which allowed us to create a fitting for the setting without having to compromise on performance, while maintaining the integrity of the architecture.”

The circular pendant ring design that has replaced the candelabras has been suspended under the glass ceiling using an anti-twisting cable suspension arrangement. The LEDs fitted inside the extrusion are covered by cylindrical acrylic glass to create a softer diffused light effect and the expanse of glass above meant there was no requirement for an indirect light source. The aluminium extrusion acts as a perfect heat sink for the SLM LED modules and only a minimal extra heat sink was inserted behind the LED fixtures.

The increased service life of the LED fixtures has seen a major reduction in maintenance issues and the additional energy saving benefits reduces ongoing costs for the library. The improved light levels produced are a major benefit in the reading room, and the tailor-made H-PROFIL chandeliers blends effortless into the listed building’s décor, maintaining its proud history and connection to the past.

“There was a certain level of skepticism when we first spoke about replacing the chandeliers,” said Andrew. “Bristol is rightly proud of this building and preserving it extends from the exterior façade to the decoration, furniture and lighting. The end result has been extremely well received, in fact the minimal nature of the design accentuates the high, arched ceiling and maximises the natural light in the library.”